Site Selection for the right to run the 1967 Worldcon was conducted by Tricon, the 1966 Worldcon by a vote held at the WSFS Business meeting at Tricon. There were four bidders: 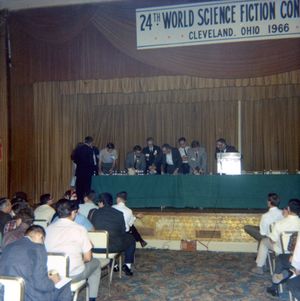 The bidders counting ballots during the WSFS BM. Ben Jason in white shirt, arms folded, and George Scithers, behind podium and microphone).
(Photo by and copyright Andrew Porter.)

Note that this was not done by means of a Transferable Preferential Ballot like today, but by three separate votes on the floor of the Business meeting, thus accounting for Baltimore in '67's loss of six votes from round one to round two. Also note that more than fifty more people voted in the second round -- more people came into the room (probably someone rousted them from down in the bar.)

New York in 1967 was declared the (rather stunned, by contemporary reports) winner and went on to run NyCon III.