From Fancyclopedia 3
(Redirected from Ted A. Johnstone)
Jump to navigation Jump to search 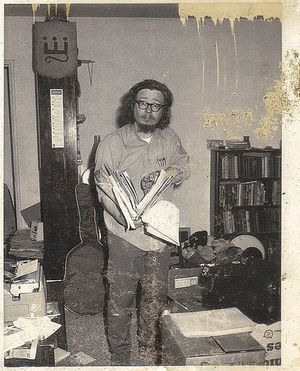 Ted A. Johnstone was the fan name of David Edward McDaniel, a member of LASFS, and the Hyborian Legion who ran for TAFF in 1968. He lived at the Fan Hilton and participated in Coventry under the nickname Tedron. He was the R in the ARBM Boys.

He was an early Tolkien fan and organized the first Tolkien club, The Fellowship of the Ring, and wrote High Fly the Nazgul, Oh!, the first known Tolkien filksong. He sang The Ballad of Killer Kemp in The Musquite Kid Rides Again! (He also had a non-singing part in The Purple Pastures.)

Johnstone published The Willis Papers, and A Fanzine for Atom/Rotsler. He was editor for a time of the LASFS Newsletter, Menace of the LASFS, I Palantir, and of Shangri L'Affaires. His Ruritania was one of the first Diplomacy-by-mail fanzines.

He belonged to The Cult, where he served as Official Arbiter. He also participated in TAPA, IPSO and APA-L. He was a member of most of the APAs of his time, but he didn't try to be an omniapan.

He led the LA in '67 Westercon bid and for a time was chairman of Westercon 20.

He was the author of several of the 1960s Man From U.N.C.L.E. novels. He included many fannish allusions in those stories like having a thinly veiled Forry Ackerman in one story and the trivia game Botticcelli in two others. He was a fanquet honoree in 1966.

He drove a green Cadillac ambulance named (in the tradition of fannish automobiles) Worsel.

He was married to fellow fan Lin Potter; they lived in the Hobbit Hole, an apartment downstairs from Jack Harness and Owen Hannifen's Labyrinth of Valeron, from 1964 or ’65 till 1969.