Called TOFF and sometimes TOFFund, it was a fan fund created by John and Bjo Trimble to bring a Japanese fan, Takumi Shibano, to the 1968 Worldcon. They hoped it would be the PanPacificon that they were bidding, but, regardless, it would be to the winner. In the event, it was Baycon in 1968.

As they described for Nippon 2007: 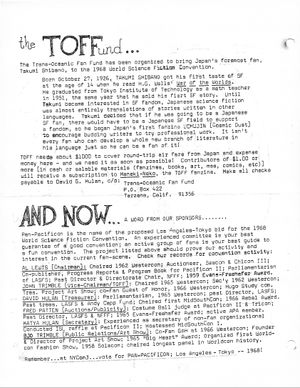 We first met Takumi (and Sachiko) Shibano through the "L.A. in '68" Worldcon bid several Los Angeles fans started after Tricon. As part of our bid, we decided to launch the "Trans-Oceanic Fan Fund" (TOFF), designed to bring someone from Japan to the '68 Worldcon.

To this end, we corresponded with long-time SF fan, Roy Tackett, recently returned from military service in Japan. While there, he had contacted Japanese fandom, so we figured that he might know someone to bring over to the US. Tackett told us about Takumi Shibano, a math teacher who read English and greatly enjoyed reading American and British science fiction.

They published Maneki-Neko to promote the fan fund.