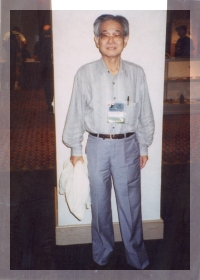 A math teacher, Takumi Shibano was one of the early members of Japanese fandom. co-founded and edited Uchūjin, Japan's first sf magazine, in 1957. He wrote several science fiction novels and in the 1970s he became a translator of science fiction into Japanese. Shibano was Fan GoH at two Worldcons, LACon III in 1996 and Nippon 2007.

He chaired many early sf conventions in Japan and founded The Federation of Science Fiction Fan Groups of Japan in 1965. In 1968, the Trans-Oceanic Fan Fund paid for him to attend Worldcon for the first time, and he was announced as a Special Guest at Baycon, and, from 1979 till his death, he attended most Worldcons and served as the presenter of the Seiun Awards.

He contributed to Roy Tackett's fanzine Dynatron. ConFrancisco gave him a special committee award "for his international activities." He was awarded the 1987 Big Heart Award. He was FGoH at Bubonicon 13 in 1982. Japan’s Takumi Shibano Awards are named for him.

His wife was Sachiko Shibano.