The World Science Fiction Society has three sets of official rules (online here): The WSFS Constitution, the WSFS Standing Rules and the Resolutions of Continuing Effect. The Constitution is the basic body of rules which govern Worldcon, the Standing Rules are lesser rules established mostly for the operation of the WSFS Business Meeting and the Resolutions of Continuing Effect are a catch-all of motions passed by the Business Meeting which happen to still have force today.

On the second day, the formal business session, submitted motions are debated, amended and passed or defeated. Since debate time is strictly limited, it's difficult to hold a substantive debate at this meeting, so usually the issues involved have already been widely smoffed in fandom — in fanzines, on email lists like the Smofs List, on social media and blogs and at smaller cons.

Participation in the WSFS BM is limited to smofs attending members on site at the current Worldcon, though any WSFS member may submit business. Attendance varies, but is usually between 100 and 200 people, most of whom attend every year. Proxies are not allowed.

Hear Ben Yalow's recollection of the constitutional shenanigans of the 1970s. wiki containing an annotated copy 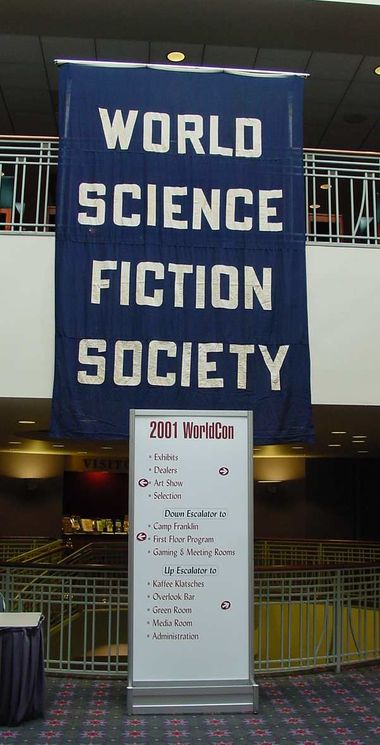 The Worldcon banner was created by Dave Kyle and Jean Carrol to fly outside the Biltmore, the hotel hosting Nycon II in 1956, which Dave was chairing. It was also hung behind the head table at the Banquet.

It appeared at a number of subsequent Worldcons until it finally disappeared. It turned out that Howard DeVore had squirreled it away. Sometime in the late 1980s or early ’90s he turned it over to the History of Worldcons Exhibit and it has since been displayed as part of the exhibit.

In 2012, Mary Morman and Kent Bloom as a project of the Worldcon Heritage Organization oversaw a conservation effort which led to it being cleaned and reinforced which should allow it to be displayed for years to come. Jill Eastlake arranged for the conservation work and Renovation helped cover the cost.