Just as people can be members of clubs, a fan who attends an sf con buys a membership in that con and becomes a member. This terminology — in contradistinction to ticket — emphasizes that fans are expected to be active participants in the activities of a con and not merely passive consumers of entertainment.

In some cases, such as Worldcon and Windycon, convention membership also comes with membership and voting privileges in the sponsoring organization.

The ideal (which is not always met, of course) is that everyone — convention committee, ordinary fans, program participants, artists, hucksters — is working together as a cooperative group to create the convention.

This manifests in a number of ways:

Many fans found that it was safer to buy a membership at the cheap rate if there was even the slightest possibility of their attending the convention. They could also buy a "Guest of..." membership at that rate just in case they found someone to invite to the con later. If one or both memberships weren't needed, they could probably be sold to latecomers from the local fandom group at a bargain to both purchaser and seller.

On the grounds that "supporting" memberships didn't actually support the convention (some cons had priced supporting memberships so low that they didn't even pay for the publications they received), and were only a way of temporizing in case someone decided months later to actually attend, L.A.con II, the 1984 Worldcon, sold “coresponding memberships,” instead. These had the right of receiving publications and of voting, but not of being converted to attending memberships.

The 2022 Chicon 8 WSFS Business Meeting ratified an amendment to the WSFS Constitution passed at Discon III in 2021 that did away with supporting and attending memberships to Worldcon.

Beginning in 2023, only annual WSFS memberships are offered. These convey all the rights previously granted to supporting members, such as voting on the Hugo Awards and Site Selection and receiving publications — however, they are not transferable.

WSFS members may then buy tickets attending supplements in order to be allowed into that year’s convention. (These may be transferred, but only to people who already hold WSFS memberships.)

The change was meant to make it so that Worldcons didn’t have to track who had and hadn’t used voting rights before transferring memberships. This has proven to be somewhat controversial in its aftermath, as many Worldcon goers who didn’t pay attention to the Business Meeting for two years found out about it only when purchasing memberships to upcoming Worldcons. Most grumbling is because the change may make it harder to recover costs if you can’t attend and want to sell your membership. 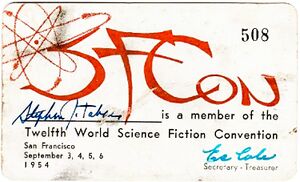 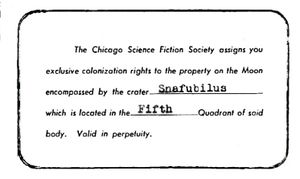 Moon deed on the back of the Chicon II Membership Card.

While clubs often have had membership cards, since some time in the 1960s, conventions have tended to have only name badges. However, for the first few decades of conventions, a membership card, numbered and signed by an officer of the convention, was issued. For Worldcons, these stated the possessor was a member of the World Science Fiction Society.

Torcon II in 1973 and Discon II in ’74 issued the cards — we aren’t sure of others after that. The reverse side of membership cards for Chicon 2 in 1952 designated a crater on the moon to which the member was granted exclusive rights.