From Fancyclopedia 3
(Redirected from Leonard J. Moffatt)
Jump to navigation Jump to search 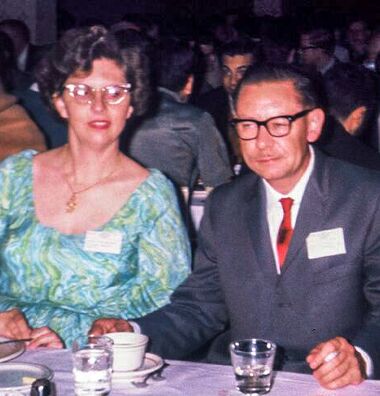 Leonard James Moffatt was a longtime Los Angeles fan. As a boy, he lived in Chewton, Pennsylvania, and in the summer of 1939, at 15 years old, he discovered prozines and tried to start an sf club.

He was married twice, both times to fen. His first wife was Anna Sinclare. He married his second, June Konigsberg, on December 10, 1966.

Len and June helped organize many of the early Bouchercons, and in 1973 and in 1999, they received a Lifetime Achievement Award from Bouchercon, the couple were the Eastbound TAFF delegates (their trip report was The Moffatt House Abroad). Dave Locke and Ed Cox published Unabashed Plug in support of their candidacy.

He was a member of the the Western Pennsylvania Science Fictioneers and the Portland Science Fiction Society. He joined LASFS on April 16, 1946, and was one of the founding members of the Outlanders and The Petards. He belonged to SCIFI, Apa-L, the D.R.E.G.S of L.A. Fandom, He was an associate member of the First Fandom club, the Burroughs Bibliophiles, the Blustering Gales of the SW, and the Curious Collectors of Baker Street. When Len was a member of N3F, he edited the 1950 Fan Directory, sponsored by the N3F and the Fantasy Foundation. He was one of the original members of CAPA in 1961.

Len wrote poetry and fannish plays and operas. He also had a clown persona, Pike Pickens, “Tramp-Clown of the Spaceways.”

Moffatt had a couple of short fiction pieces appear in the 1950s and also sold science fiction poetry. One of his stories, "Father's Vampire," originally published in Weird Tales, was reprinted in genre anthologies, including 100 Creepy Little Creature Stories (1994).

In World War II, he was a Navy Corpsman (medic) in the Pacific. Later, he worked for a manufacturer of cardboard packaging.