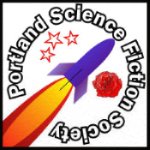 The Portland Science Fiction Society, also known as PorSFiS, is an sf club in the Portland, OR, area. (It is not normally called PSFS, to avoid confusion with the Philadelphia club.) The PorSFS clubzine is The Pulsar.

The club was founded in 1977 by Ed Foster in the back of the old Illustrated Store, and incorporated in 1978. It is still active in 2017 and is the oldest extant sf club in Oregon.

PorSFS formed just before The Portland Science Fiction Symposium, now sometimes known as "OryCon 0," was held. Although many PorSFiS members were also OryCon committee members in the beginning, Oregon Science Fiction Conventions, Inc. (OSFCI) was formed almost immediately, and while there are still cross-over members, the two groups, PorSFiS and OSFCI, are two separate organizations.

A previous Portland club with a similar name, the Portland Science-Fantasy Society, is not connected.