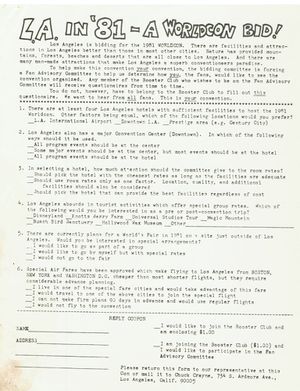 A bid to hold the 1981 Worldcon at the LA Bonaventure, Biltmore, and Century Plaza Hotels in Los Angeles headed by Chuck Crayne. Other members of the bid were Dian Crayne, B. G. Workman, Marty Cantor, and Dan Deckert.

It was a weak bid which was the result of an internal LA fannish split and accompanying fan politics. Many of the "survivors" of the failed LA in '78 bid sat out LA in '81 in favor of Denver in '81. Years afterwards, some of the people involved in the race reported that it was never really a serious bid, but was mostly intended to be a spoiler for the LA in 1984 bid, and that some of the people listed as being on the committee had never agreed to be on it. The LA in 1984 bid had already started advertising -- who was undercutting whom?

The LA bid was defeated by Denver in '81 which went on to run Denvention Two (see 1981 Worldcon Site Selection.)