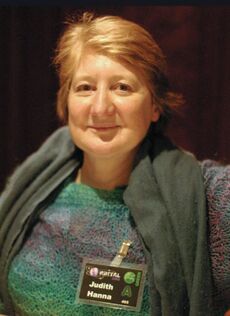 She wrote extensively for a variety of fanzines and was a welcome letterhack through the 1980s and ’90s. She was a reviewer for Vector and Paperback Inferno, among others. Her fanwriting was selected for Fanthology '88, Fanthology '89 and Fanthology '93.

She stood unsuccessfully in the 1986 TAFF Race with this platform:

She married fellow fan Joseph Nicholas on November 19, 1983. She was an avid gardener. She died of breast cancer, after months of treatment. On August 29, 2021, Judith wrote on Facebook:

Death sentence, I’m afraid, my friends. Metastasis aggressively attacking liver, c’est la vie. Nice knowing you all.
At least I don’t have to worry about hell into infernal handcart inferno: keep up the good fight!
Leaving heroic Joseph with massive paperwork legacy...
Cheers, thanks for all the fish...