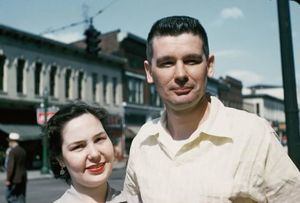 Fern Brooks and Bob Tucker at Midwestcon 3 in 1952.

Fern Delores Tucker (née Brooks) married Bob Tucker, 20 years her senior, on Nov. 3, 1953, at the Second Presbyterian Church in Bloomington, Illinois. She was his second wife. Fern attended a few Midwestcons and other conventions with Bob in the 1950s, but soon lost interest and let him do his frequent con-going stag. That, no doubt, is how they stayed married so long.

She was, however, unfailingly gracious to those fans who visited them in Bloomington, though Tucker did not encourage drop-ins, and fanzine accounts of visits to him fall off after their marriage, as did his own publishing schedule.

Fern worked full-time throughout much of their marriage, first as a librarian and later as a supervisor for GTE. After his 1972 retirement as a projectionist, Bob used to say she supported him.

The Tuckers had three sons: David, Brian and Bruce; Fern was stepmother to two earlier children, Judy and Robert (whom Tucker called “the real Bob Tucker”), from Tucker’s first marriage to Jane.

Obituary in The Pantagraph.