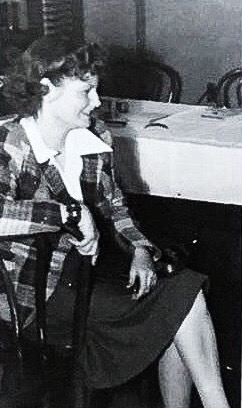 Jane Tucker at the Michiconference in 1941, from Le Zombie 46: “Our wife, the mother of a couple of slans.”

Fans liked her. Phil Bronson wrote in in Fantasite Vol. 2, No. 4 (November/December 1942), “Janie’s smile is most infectious. In case you don't know it already, Tucker is a lucky fellow, because Mrs., in addition to being pretty, is also the world's best cook, barring none. You should taste her coffee sometime.” In Le Zombie 51 (February 1943), Walt Liebscher wrote, “Jane is one of the most tolerant girls I’ve ever met.”

Jane is credited as a co-editor on the 1939 Yearbook of Science, Weird & Fantasy Fiction with Bob, Damon Knight and Harry Warner, Jr.

The couple had married March 16, 1936, and had two children, Robert (whom Tucker called “the real Bob Tucker”) and Judy.

Yet the marriage ended about 1943. By 1944, Jane had married Michigan fan Tommy Tomkins, whom she’d likely met at Michicon; they were married till her death, but both had apparently gafiated by the end of World War II.