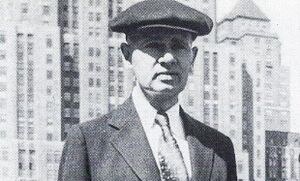 Farnsworth Wright in front of the Merchandise Mart, Chicago.

Farnsworth Wright was the editor of Weird Tales from 1924–39, the magazine's heyday. In his very early days in San Francisco he was active in amateur journalism and published The Laurel for NAPA and UAPA until his letterpress was destroyed in the great earthquake. Had he continued, it is possible that The Laurel might now be remembered as the first fanzine.

He wrote poetry as Francis Hard, and short fiction, but is best remembered as an editor. A graduate of the University of Washington and a veteran of World War I, Wright was working as a music critic for the Chicago Herald and Examiner when he began his association with Weird Tales, founded in 1923. At first serving as chief manuscript reader, he replaced founding editor Edwin Baird in 1924.

Wright anonymously edited an anthology of Weird Tales stories, The Moon Terror (1927), as a bonus for subscribers. He also edited a short-lived companion magazine, Oriental Stories (later renamed Magic Carpet Magazine), which lasted from 1930 to 1934.

He was the uncle of fantasy writer David Wright O'Brien. He married Marjorie J. Zinkie in 1929; they both attended Nycon, the first Worldcon in 1939, along with their son, Robert. All three of them attended a meeting of the QSFL on March 3, 1940.

Wright had suffered from Parkinson’s Disease since 1921, and had to resign from his job due to ill health in December 1939; he died soon afterward. However, Fantasy-News for February 18, 1940, claimed Wright was dismissed.