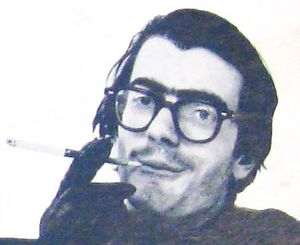 Del Close, a teenager from Kansas, was active in science fiction fandom ca. 1950. He co-edited a hectographed fanzine, Cataclysm, and belonged to the International Science Fiction Correspondence Club. His profile from the “Kollektor’s Korner” in their clubzine, The Explorer (August 1950, p. 12):

The Summer-Fall 1951 issue of Destiny reported that one of its editors had been to visit Del during an odd (and unexplained) event:

Unfortunately, Close gafiated soon afterward. He would indeed make his profession dramatics. He went on to become one of Chicago’s most iconic actors and comedians, a legend in improv circles and a notable teacher who coached many of the best-known comedians and comic actors of the late 20th century. He was a founder of The Second City comedy empire and a mainstay of ImprovOlympics. He also wrote comic books.

While no longer an actifan, he did retain his interest in sf collecting and was a regular at The Stars Our Destination bookstore.

He was as flamboyant in death as in life. A provision of his will read, “I give my skull to the Goodman Theatre, for a production of Hamlet in which to play Yorick, or for any other purposes the Goodman Theatre deems appropriate.”