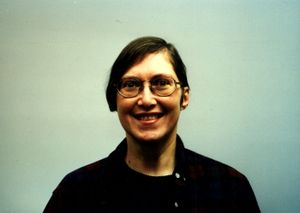 Claire Graham Anderson was a long-time Boston fan who became active in NESFA in the 1970s and remained active until her death. Working mostly in the background, she was a mainstay of NESFA, having served many times as Clerk where she set an enviable standard for publishing interesting, large and on-time issues of Instant Message. As a professional librarian, she also led NESFA's library for many years. With her husband, Dave Anderson, she chaired Boskone 26 and Boskone 37. She was a member of MCFI and of APA-NESFA. She was named a Fellow of NESFA in 1984. In con-running she was probably best known for her work in Art Shows and in setting up brilliant small exhibits at Boskone.