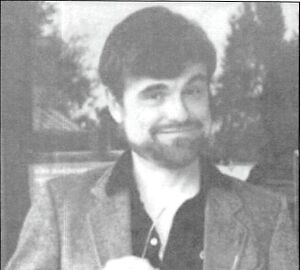 Bradford Swain Linaweaver was an American fan and SF writer. He became a fan about 1969 as a member of the Tallahassee Mad Gang, although he had been reading SF for many years. He was an avid fan and correspondent with Ray Bradbury and Forry Ackerman. He had an affectation of signing his notes as "Burybrad".

Brad went to his first convention, Dallascon, in Dallas, Texas, in July, 1971, damaging Joe Siclari's car on a bridge going over the Mississippi. Ackerman was one of the GoHs. The most notable thing at the con was the announcement of John Campbell's death. Brad's first fiction appeared in Siclari's fanzine, unterHelios that same Summer.

Linaweaver had original story credits on a number of films, including The Brain Leeches and Jack-O for Fred Olen Ray. He also had story credits in The Boneyard Collection and Space Babes Meet the Monsters.

The novella version of his novel Moon of Ice was a Nebula Award finalist and the novel length version won a Prometheus Award. He was a Libertarian, and the novel carried endorsements from Robert A. Heinlein, Isaac Asimov, Ray Bradbury, and William F. Buckley, Jr.

In 2004, he co-authored Worlds of Tomorrow with Forrest J Ackerman, a hardcover coffee table book that spotlights SF cover art from the Golden Age with full color reproduction and commentary from the authors.