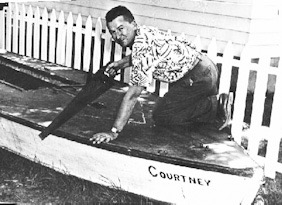 He grew up in the small town of Fond Du Lac, Wisconsin, and was in the Army Air Corps during World War II. In the 1950s, he became active in fandom. He was married to Jean Grennell; they had seven children. In the 1960s, he moved to LA and was a member of The Petards.

In mundane life, Grennell was a tech writer and an authority on firearms, who authored many books on the subject, as well as being managing editor of Gun World magazine. He moved to California to take that job in 1966.