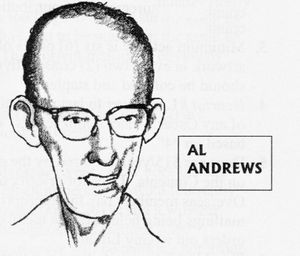 He suffered from Muscular Dystrophy and by 1969 the progress of the disease had made it impossible for him to continue his last fannish activity, the APA SFPA. For some years another fan had published his apazines for him, but that fan gafiated. The apa quickly missed Al's friendly presence. It proved easy to find another person to handle duplication of his apazine, but using his manual typewriter had by then become a serious problem.

In 1969, Hank Reinhardt organized the Al Andrews Typewriter Fund to raise the funds for an electric typewriter. By the end of St. Louiscon, the 1969 Worldcon, they had raised $250 and Andrews returned to activity in SFPA with the apazine As I Was Saying....

Sadly, this one contribution was his last, as early in 1970 he slipped and fell down the stairs in the nursing home in which he was living and died.

Bill Plott writes in Remembering Al Andrews that he was a "dedicated correspondent, genuinely funny guy, and good friend."