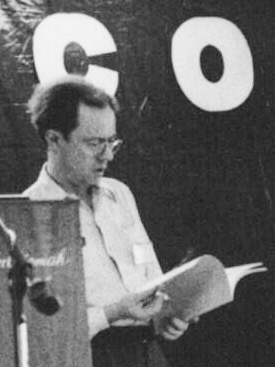 Anthony Boucher was the penname of William Anthony Parker White, a fan who was best known for his pro work as an editor and and writer. He was heavily involved in the mystery field as well as classical music. He used the pseudonym H. H. Holmes (presumably after the 19th-century Chicago serial killer) as well. (He became a believer in pseudonyms when a search of the Library of Congress revealed 75 different writers already with the name "William White.")

His interest in fantastic literature began early. He wrote locs to Weird Tales in 1925. He was a lifelong Californian living in the Bay Area, a good friend of Poul and Karen Anderson, and a founder of the Elves, Gnomes & Little Men's Science Fiction, Chowder & Marching Society. He attended the first Staplecon in 1943. He was interested in sf bibliography. (See also Drama.) At conventions, he was a party-goer and poker player.

Along with J. Francis McComas, Boucher was founding editor of The Magazine of Fantasy & Science Fiction and remained with the magazine from 1949 to 1958; he was a pioneer in improving the literary quality of sf. He also edited the long-running Best from Fantasy and Science Fiction anthology series through 1959.

His own short SF appeared in all the major magazines and includes a number of classics, including "The Quest for Saint Aquin" (selected by SFWA for The Science Fiction Hall of Fame, Volume One) and “Q.U.R.” (mentioned under Liquors). His first story was for Weird Tales in 1927.

He was Worldcon GoH at NorWesCon (the 1950 Worldcon), FGoH at Westercon 18. He was a popular Toastmaster, performing those duties at the Clevention, Solacon, and Pacificon II. At the Solacon, he helped mediate the end of the WSFS Inc affair.

Boucher was the friend and mentor of science-fiction writer Philip K. Dick and others. His 1942 novel Rocket to the Morgue (published as by H. H. Holmes), in addition to being a classic locked-room mystery, is a roman à clef about the Southern California science fiction culture of the time, featuring thinly-veiled versions of personalities such as Robert A. Heinlein, Jack Williamson, Edmond Hamilton, L. Ron Hubbard and rocket scientist/occultist/fan Jack Parsons.

He was a member of the International Fantasy Award judging panel. He was also an expert on opera, and wrote articles and presented radio shows on the subject.

He was married to Phyllis White. He died of lung cancer in 1968. After his death, Bruce Pelz and other sf fans who were also interested in mysteries founded Bouchercon, the mystery field's Worldcon and named it after him. He was memorial GoH at FOGcon 2013.

A mystery novel by Anthony Boucher (originally published as a hardback by Duell, Sloan & Pearce and as a paperback by Phantom Mystery in 1942 under his H. H. Holmes pseudonym), in which members of an SF writers’ organization play a major role.

The organization (and the writers) are thinly disguised versions of the Mañana Literary Society and several of its members, including Robert A. Heinlein, Jack Williamson, L. Ron Hubbard, John W. Campbell, Jack Parsons, and Edmond Hamilton. The book was dedicated: "For the Mañana Literary Society and in particular for Robert Heinlein and Cleve Cartmill."

The People Behind the Characters:

Note that several of these names (Anthony Boucher, Anson Macdonald, Lyle Monroe, Don Stuart) are actual pseudonyms of the people in question.