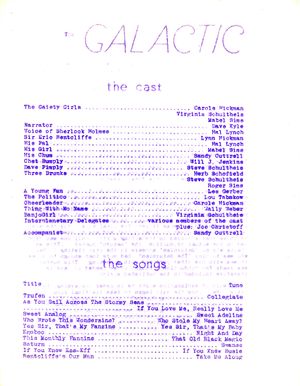 The Galactic Gaieties was more of a collection of fannish parodies of popular songs joined together by something resembling a story than an actual musical. Lyrics were by Steve Schultheis and Virginia Schultheis, while Hal Lynch did pretty much everything else. It was presented at Pittcon, the 1960 Worldcon. It was published in the fanzine Gumbie 3.

The Galactic Gaieties online at fanac.org