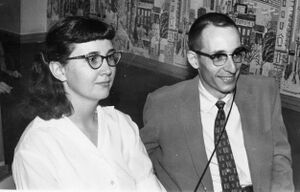 Virginia Schultheis, a fan and librarian from Cleveland area, moved to the LA area in the late ’50s.

She was married to fellow fan and librarian Steve Schultheis and many of their projects, such as fannish musicals Captain Future Meets Gilbert and Sullivan and The Galactic Gaieties, were joint.