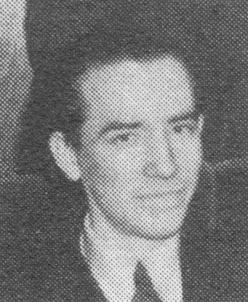 Samuel Davenport Russell, a fan who became active in the late 1930s, joined MFS in Minneapolis in the early ’40s, then was very active in LASFS in Los Angeles during World War II.

He was deeply interested in H. P. Lovecraft and was co-editor with Francis Towner Laney of The Acolyte in the 1940s; in 1996, it was a 1946 Best Fanzine Retro Hugo nominee. He published Haunted in the ’60s. He published Have at Thee Knanves as part of the War of the Knanves. He was a member of FAPA from September 1942 to August 1948 and again (briefly, as he did not contribute and was dropped for inactivity) in 1969–70.

During and after the war, Russell was an undercover FBI agent who, among other things, investigated many LASFS members. He testified about them — blowing his cover — during the McCarthy era (with no untoward consequences), but later reconciled with some of them. He gafiated for a number of years, but became revenant in 1962. He and his wife, Florence Russell, moved to England in 1972, where he died.