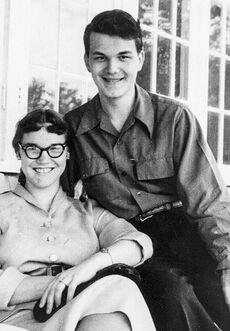 Perdita (pronounced "perdeta") Boardman (née Lilly, then Nelson, then Girsdansky) became a fan in the late 1940s (she attended Norwescon, the 1950 Worldcon). She lived in Chicago in the early 1950s, and moved to New York in the late ’50s.

Fannish publications include Leftovers. She helped start the New York SCA chapter in the late ’60s and was active in it for many years. She was also a member of the (Second) Futurian Society of New York and a Fanoclast.

She was an accomplished seamstress and made the WSFS banner used by the New York in 1967 Worldcon bid as well as Heidi Saha's original Vampirella costume and table coverings for SFC and Algol.

She was first married to SF author and cartoonist Ray Nelson in the 1950s; she was the subject of his poetry collection, Perdita: Songs of Love, Sex and Self Pity. She then married fan Mike Girsdansky (their daughter is fan Karina Boardman), and finally fan John Boardman.