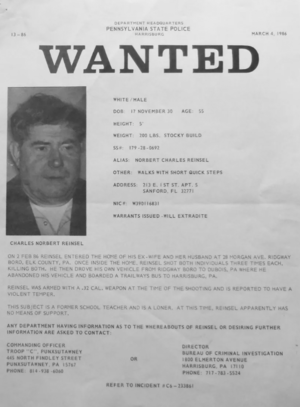 A fan of comics and Edgar Rice Burroughs, Charles Norbert “Norb” Reinsel published 100 issues of Norb's Notes and five issues of Comics, Cinema, and Collecting. At Pittcon (1960), he was elected first treasurer of the newly formed Burroughs Bibliophiles. During most of his fanzine publishing years, Reinsel lived in Clarion, Pennsylvania. From 1966 until about 1973, Reinsel published Big Brother, a play-by-mail gaming zine for the Diplomacy hobby.

(In a fanzine called Tales of Torment, published in the early 1960s and ’70s, John Stockman parodied Reinsel and Norb's Notes, along with other collectors of comics and ERBiana. Several of Stockman’s stories are available in an anthology entitled The Crackpot, edited by Dwight Decker, forward by Richard Lupoff, Ramble House & Surinam Turtle Press, 2015.)

In 1986, Charles Reinsel pleaded guilty to the first degree murder of his former wife, Barbara Motter, and third-degree murder of her new husband, Herman Motter. He shot each of them three times with a .32-caliber handgun in February 1986, according to a warrant issued in Elk County, Pa. Reinsel was sentenced to life in prison, where he died in 2004.

For other criminals in fandom, see Legal Matters.