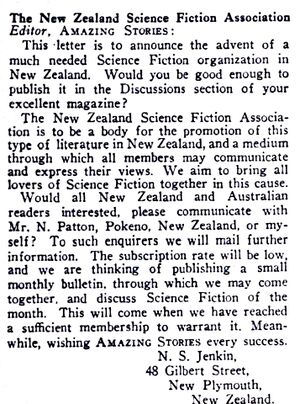 Noel Stanley Jenkin of New Plymouth was the first New Zealand fan to publish a mimeographed fanzine, Science Fiction Bulletin, in 1935. He appears to have been the first fan outside the United States to do so, as acknowledged by Walt Willis in a column published in Nebula magazine.

The zine was the OO of the New Zealand Science Fiction Association, which Jenkin launched with Norman S. Patton, also of New Plymouth, going so far as to write to Amazing Stories and Wonder Stories to promote it and to publish an advertisement in the New Zealand Herald newspaper in February 1935 that told interested persons of its aims to advance science fiction, asking, “CAN MAN FLY TO THE MOON?” Despite these promotional efforts, the club never went anywhere.

Jenkin was awarded one of the first NZ Fulbright Scholarships in 1953 and moved to the US, where he earned a doctorate, and subsequently had a successful academic publishing career as a psychologist. But sadly, he did not publish any more fanzines and doesn’t appear to have connected with U.S. fandom. He died unexpectedly in Chicago at age 54.