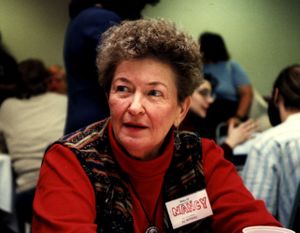 She threw herself wholeheartedly into whatever she did. For the E/c2 ConFusion masquerade in 1979, she dressed as one of the newly resurrected Riverworld denizens of Philip José Farmer’s To Your Scattered Bodies Go and, for authenticity, shaved her head. 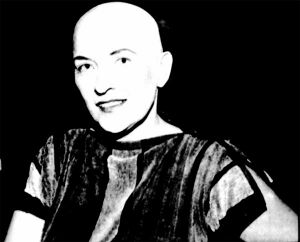 She frequently worked with Larry on fannish projects, including conrunning, videotaping con programming, and the production of Faans, and supported him in many other ways. She was a close friend of Bob Tucker’s; they were no relation, but rarely denied it when clueless fans assumed they were a married couple and Larry was their son.

In 1995, she married Irish BNF and pro Bob Shaw, her second husband, who emigrated to the United States to live with her until illness forced him back to the UK shortly before his death in 1996.

Nancy had a career running the audio-visual equipment department at the University of Michigan. She was an excellent and creative cook and gardener. She had four sons from her first marriage to Tom Tucker, which ended in divorce when the boys were young. The couple split custody of the four boys between them; she reared the younger pair. Larry was brought up on Chicago’s North Shore by his father. Nancy was related to famed psychiatrist Karl Jung.