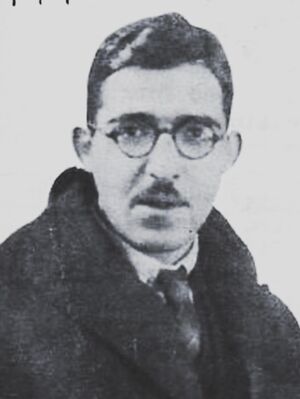 John Michael “Mike” Rosenblum was one of the UK's first, and best-liked, fans. He was active in Leeds fandom from the mid-1930s and attended the 1937 Leeds Convention. He was on the committee of Midvention in 1943. In the 1950s, he helped form the Leeds Science Fiction Association and was active in the BSFA and FAPA.

He published fanzines in the 1930s through the ’50s, the most famous of which was the Futurian War Digest (FWD), and was a regular at British conventions into the 1970s. He was known for having one of Europe's largest collections of SF.

During WWII, he was a conscientious objector and was put to work on a farm during the day and as a fire watcher during German night-time raids. His publishing activity with FWD was very nearly the only thing that kept fandom alive in Great Britain during the War.

He was married to Betty Rosenblum. Their son, Howard Rosenblum, was also a fan.