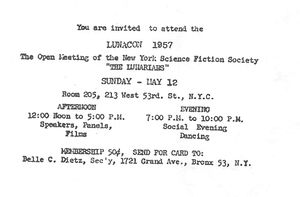 Lunacon 1 was a one-day convention held May 12, 1957 in Room 203 at 213 West 53rd St, Manhattan. There was no GoH -- initially, the Lunacon was seen as a replacement for a large social meeting such as an annual party. (The name "ConFusion" was considered, but George Nims Raybin came up with the name "Lunacon".) It had 65 members by one report and 52 by another.

Originally, the Barrons (the people who did the sound effects for Forbidden Planet) were to be the main speakers, but the night before the convention, substituting Lester del Rey was discussed.