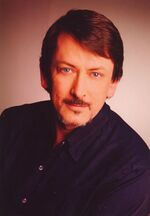 He is OE of Sword & Sorcery and Weird Fiction Terminus and a former member of the Futurian Society of Sydney.