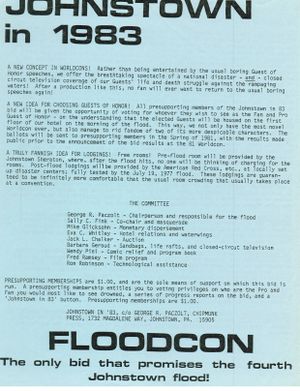 Among other things, they promised that at Floodcon the GoHs would be drowned by the flood, which offered a way to deal with widely-disliked people who still deserved the honor.

Facilities: Pre-flood, the rooms will be in the Sheraton. Post-flood, they will be supplied by the Red Cross. The bid committee also noted that this convention presents great opportunities for fans who have invested in mop manufacturing.