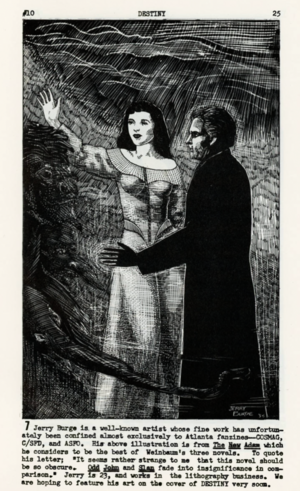 An Atlanta-area fanartist, Jerry L. Burge was a member of the Cosmic Legion, a member and officer (1951) of the Atlanta SF Organization, The Rotal Order of Chattahoochee, Okefenokee, and Ogeechee District Swamp Critters, SFG (and was OE in 1960), and Southern Fandom Confederation. He was art editor of Cosmag. With Carson Jackson, he published the first hardcover edition of Sam Moskowitz's The Immortal Storm.

Destiny 10 (Summer 1954) featured him in a portfolio of “ten of fandom’s most outstanding artists,” commenting:

Burge was diagnosed with congestive heart failure in December 2003 and in January, he underwent surgery to repair a heart valve. He died a few months later.