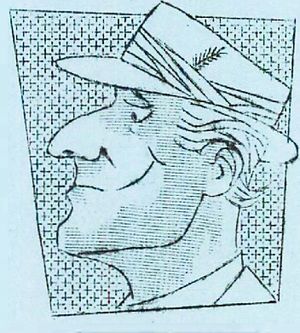 Harrison. Art by Eddie Jones from Waldo No. 1.

“Sir William Makepeace Harrison” was the fictional hero of a long series of humorous stories in Triode and (once) Bastion in the 1950s–70s. He was loosely based on the real-life William or Bill Harrison who was a member of the Liverpool Science Fiction Society: the relevant entry in Eric Bentcliffe's club profiles in Waldo No. 1 (December 1959), online here, treats the real and fantasy Harrisons as the same man.

The first four Harrison tales in Triode appeared as episodes under the overall title Beloved Is Our Destiny. The third, “Crossed Steel” from Triode 13, was collected in the fanthologies The Best of Fandom 1958 (1959) and When Yngvi Was a Louse (1982). There are ten stories in all.

An annotated collection of the whole sequence, The Harrison Saga: The Extraordinary Exploits of Sir William Makepeace Harrison edited by Rob Hansen, was released as an Ansible Editions ebook in March 2022.