From Fancyclopedia 3
(Redirected from G. M. Carr)
Jump to navigation Jump to search 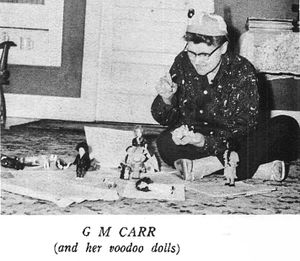 Known as G. M. Carr or GMC or sometimes Gertie Carr, she was a Seattle fan. She discovered fandom in 1949, and attended Norwescon in 1950. She was a charter member and officer of The Nameless Ones.

She was a member of the N3F and N'APA and a volunteer in the N3F Correspondence Bureau. BuHead Ev Winne commented in TNFF for February–March 1952:

Carr was a member of the First Fandom club. She was a candidate for TAFF in 1956.

She seems to have been a somewhat controversial and difficult person. Walter Breen named her one of the Three Big Bitches of Fandom, but consider the source. She quarreled with Walt Willis in FAPA during the TAFF Wars. 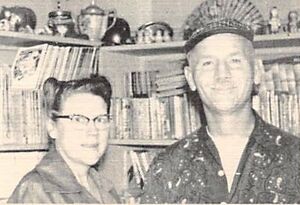 She remained largely gafiated from fandom, but in the 1960s and ’70s became deeply involved with Star Trek fandom. Her APA activity continued until she was in her late 90s. Other apas of which she was a member included WAPA, BSFA, TLMA, and N'APA.

Her papers are housed at the University of Iowa.