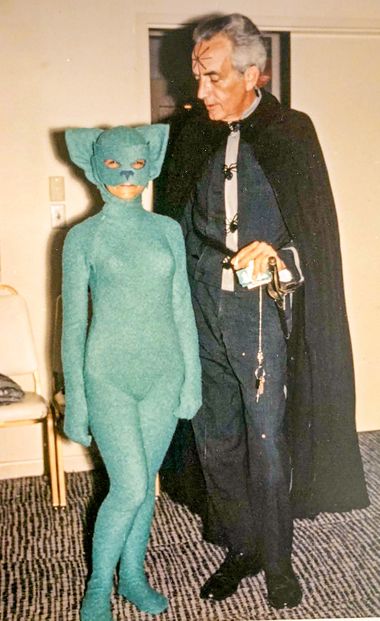 Jonquil and Fritz Leiber in 1953, probably at Westercon 6.

Fritz Leiber, Jr., a writer of fantasy, horror and sf, was also a poet, an actor, a chess player and a champion fencer. He was one of the rare pros to have been a Worldcon goh twice, at Nolacon in 1951 and Seacon '79.

He had a long and close relationship with fandom. He was a member of the Hyborian Legion and of LASFS, an attendee at Centracon, and a contributor to Vorpal Glass and Amra. He was also one of the leaders of the Chicago: 1959 Worldcon bid.

He acted in the title role of a fannish fantasy film by Unicorn Productions, The Genie, in 1959, and helped compose at least one fannish musical.

His first fiction appeared in The Churchman for December 1, 1934, and he began selling to Unknown in 1939. He contributed to the Lovecraft mythos and wrote a Tarzan book endorsed by Edgar Rice Burroughs, Inc.

His most famous creations were the characters Fafhrd and the Gray Mouser. Leiber was a founding member of the Swordsmen and Sorcerers' Guild of America and coined the term Sword and Sorcery. His work was a big influence on the D&D game.

In 1962, Chicon III presented a special committee award to him and Hoffman Electronic Corporation for the use of SF in advertisements.

Leiber was born in Chicago, the son of two actors, the noted Shakespeareans, Fritz Leiber, Sr., and Virginia Bronson. He spent part of his youth acting in his parents’ troupe as well as in a few films, including with his father in RKO's The Hunchback of Notre Dame (1939).

Leiber told a San Francisco Bay Guardian reporter in the April 10, 1991 issue: “My parents were Shakespearean actors. I acted with them for two seasons, worked as a speech instructor at Occidental College in Los Angeles, served as a writer and editor for an encyclopedia publisher in Chicago, worked during World War II as an aircraft inspector in Santa Monica, and spent 12 years as associate editor of Science Digest.”

He studied for the ministry at the University of Chicago and briefly served as the Episcopalian pastor at Saint Mary's in Middleton, New Jersey, in 1932.

On January 18, 1936, he married Jonquil Stephens, an English poet whom he’d met in 1933 while attending the University of Chicago. At her instigation, that fall they entered into a correspondence with H. P. Lovecraft that would be a great influence on Leiber. She was the inspiration for Conjure Wife and he put together a chapbook of poems of hers and others he had written to her, Sonnets to Jonquil and All (Roy A. Squires, publisher), in 1978.

They had one child, Justin Leiber, who also wrote sf. The family lived in a wooded area in Pacific Palisades with a figural fountain in the yard based on Justin. After Jonquil’s death in 1969, Leiber moved to San Francisco, where he struggled with alcoholism and barbiturate abuse; the situation inspired Our Lady of Darkness.

He left some papers to the University of Houston, part of which form the Fritz Leiber Science Fiction & Fantasy Convention Flyers & Programs Collection. Other papers are at Lilly Library of Indiana University.

Fafhrd and the Gray Mouser[edit]

(Were you looking for the Ed Cox and Ron Ellik fanzine Fafhrd?)

Fafhrd and the Gray Mouser are a pair of antiheroes created by Leiber and Harry Otto Fischer as protagonists of a series of fantasy stories, beginning with "Two Sought Adventure" (Unknown, August 1939), which became Leiber's best-known work.

Fafhrd is a mighty-thewed barbarian and the Mouser a former wizard’s apprentice-turned-thief. One of Leiber’s motives in writing them was to have fantasy heroes closer to true human nature than previous fictional heroic characters. The “Fafhrd and the Gray Mouser” series is quintessential Sword & Sorcery.