From Fancyclopedia 3
(Redirected from Fred Duarte, Jr.)
Jump to navigation Jump to search 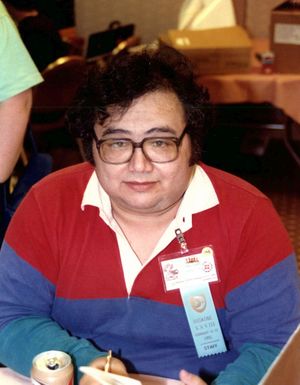 An Austin, Texas, conrunning fan, Fred J. Duarte, Jr., found fandom in 1981. He was a member of FACT (of which he had been Chairman) and of NESFA. He was Fan GoH of ArmadilloCon 33.

He was deeply involved in running ArmadilloCon (chairing numbers 9, 10, 14, and 17). He also chaired Smofcon 13, World Fantasy Convention 2000, World Fantasy Convention 2006, and Westercon 49. He chaired the San Antonio in '97 Worldcon bid and was a vice-chair of the resulting LoneStarCon 2 and worked on both Texas Worldcons. He also worked on numerous other regionals and Worldcons and bids.

He was married, for a time, to fellow fan Karen Meschke. They had one son, Matthew. As was widely publicized by Karen during a 2021 Discon III controversy, Fred was of Latinx heritage.