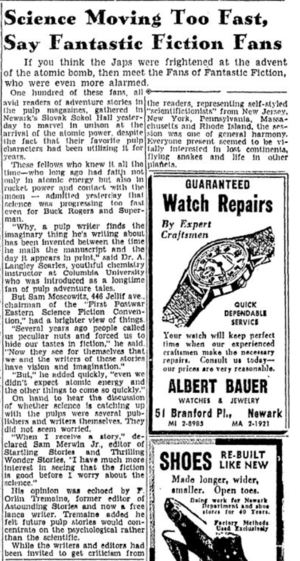 The First Post-War Eastern Science Fiction Conference was a convention sponsored by the newly-formed Null-A Men (the later ESFA) and chaired by Sam Moskowitz. It was held on March 3, 1946 at the "gloomy" Slovak Sokol Hall in Newark, NJ.

L. Sprague de Camp was invited to give the keynote speech and was effectively the GoH, though he was not designated as such (the idea of a convention having a GoH was not yet a firm part of fannish tradition.) The FPWESFC was later retroactively counted as an Open ESFA.

Attendance was over a hundred — a very good number (the previous Worldcon had only had 90 attendees and Pacificon, the 1946 Worldcon only had 130).

It's reasonable to think of this as the first Open ESFA.

It got a writeup in the next day's Newark Star-Ledger, and Harpers for September 1946.