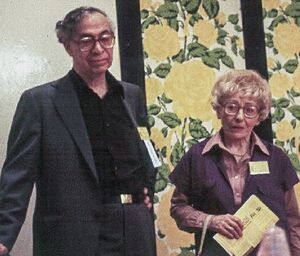 Elsie Wollheim (née Balter) was a member of the original Futurians of New York and assisted them in their publishing efforts. She published the fanzine Futuria with Chet Cohen in 1941 and a one-shot, Highpoints, dated March, 1945. She had a car, and ferried various Futurians to events, including a trip to Chicago in 1940 in honor of Fred Pohl’s 21st birthday.

She was a member of Vanguard.

Daughter of a jeweler, in the 1920s, she attended Hunter College. She studied bookkeeping, and took over the bookkeeping for her father during the Depression. She then learned stenography and typing and ended up working in a law office. She briefly dated a couple of other Futurians, but married Donald Wollheim in 1943.

“Wollheim’s courtship was slow,” recalled Damon Knight in Hell's Cartographers (Brian W. Aldiss and Harry Harrison, eds.; Orbit, 1976). “Wollheim gave Elsie a friendship ring after about five years and after another three or four they were married (Telling me about the friendship ring, Elsie said, ‘And then, do you know what Donald did? He kissed me.’)

Friends referred to the Wollheims as "the Wollies." When Don started DAW Books in 1971, Elsie was the co-founder, and inherited the company when he died. Their daughter, Betsy (b. 1951), now runs the company, although it was sold in 2022.

Donald Wollheim dedicated his nonfiction book on SF, The Universe Makers (1971): "For Elsie, who shares my personal universe."