The Decker Dillies, an sf club in the tiny town of Decker, Indiana, consisted of Marvis Manning (a pharmacist and pilot); his brother, Vincent Manning (a radio ham)[1]; his wife, Faye Manning (aka Fayogo); William Sisson (a stamp collector and druggist); Maurice Paul (a farmer and hectographer); Claude E. Davis, Jr. (an amateur scientist and farmer); and M. Spivis (who knows?). This seems to have been their only participation in fandom and all that’s known about them.

The club, comprised of childhood pals, had begun in 1939 as the Literature, Science, and Hobbies Club in the village in rural Indiana. Before any of the members discovered fandom, they had already built a two-room cabin as their clubhouse and furnished it with laboratory equipment and a skeleton named Oscar, which members later brought with them to Chicon I. The three Mannings, Maurice Paul, Bill Sisson and his wife, Rosalie, as well as Oscar, were all on rolls of the Denvention, also.

Somehow, they made contact with fandom and burst on the scene with the first, hectoed, issue of Pluto in the Spring of 1940. It was published five times between its launch in April 1940 and its demise in January 1941. The second issue was stunning, having been done in three-color mimeo, and included the first fannish article on the zapgun.

On December 22, 1940, Marvis and Faye Manning, with Paul and Spivis, drove to Bloomington, Illinois, to visit Tucker and bring him a mimeographed cover for Le Zombie, which event he recorded therein.

In early 1941, a local paper published a major article on the club: 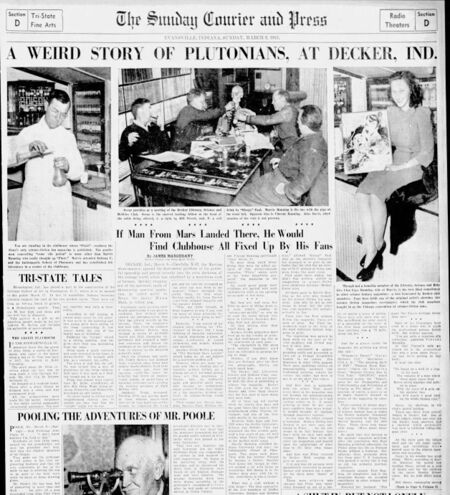 An article about the Decker Dillies (called the Plutonians in the article), including photos of Bill Sisson, Maurice Paul, Vincent Manning, Maurice Manning, Oscar, and Faye Manning, which appeared in the Evansville Press on Sunday, March 9, 1941.

A follow up, on March 27, 1944 reported that four members, Bill Sisson, Marvis and Vincent Manning, and Maurice Paul were all serving in the military.

The club disbanded due to marriage and military service, although when Dale Tarr visited in 1963, the Dillies returned a book he had loaned to them at Chicon. After they gafiated, Larry Farsaci acquired their fanzine collection for the cost of transport.