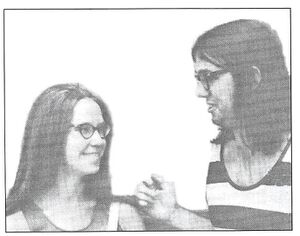 Cliff and Susan Biggers. Photo by Guy Lilliam III from the DSC 50 PB

Cliff Biggers is a fan who is also a comic book writer and journalist. He is married to fellow fan Susan Biggers.

His first published writing appeared in fanzines in the mid-1960s. He was a founding member of the amateur press alliance (APA) Myriad and was active in the Southern Fandom Press Alliance, a southeastern-based APA. He was a member of ASFiC and one of the editors of Atarantes.

He organized Half-A-Con and chaired DeepSouthCon 18. He was part of the Atlanta in '86 Worldcon bid committee.

He was also involved in Galaxy, Clapa (founder), CAPA-Alpha, Apa-5, SFOA, Myriad, and other APAs.