Caravan Hall is the building in New York City in which the First Worldcon was held on the 4th of July in 1939.

David Doering has done extensive research on the site, published in File 770: 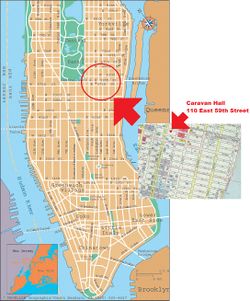 The Search for Caravan Hall[edit] 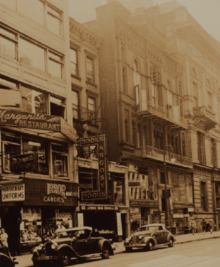 On the first weekend in July 1939 (July 2-4th to be precise) the so-named "World Science Fiction Convention" was held in New York. Later referred to as NYCon 1, this was the birth of the Worldcon, as well as the spawning a myriad of other cons, spanning now 3/4s of a century. Little noticed by surrounding New Yorkers at the time, the 200-strong legion of fen gathered in Caravan Hall [2] to celebrate in collegial fashion their passion for all things SF.

The address is easy enough to locate in Midtown Manhattan. (In fact, there's still a building at 110 E. 59th.) Here's the site found on a map. 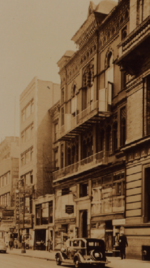 What I yearned for though was to actually see where this pivotal event occurred. It took a year of searching[3], but now I've found two good pictures of this heralded hall and its environs. Here then is Caravan Hall looking to the south-west on 59th Street towards Park Avenue:

Caravan Hall is the wide building in the middle, with the actual meeting hall on the 3rd floor (the floor with the open doors on the balcony).

Looking towards the southeast, Caravan Hall is the balconied building at the center:

Notice in both pictures "Argosy Books" situated right next door. I can just imagine that quite a few NYCon members wandered over there to browse, if not buy, in that store[4], or to eat at the Margarita Restaurant or the candy shop. 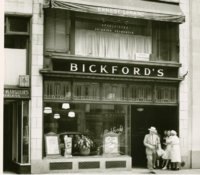 The clarity of these photos makes it easy for me to imagine the banner stretched across those balcony railings proclaiming "First World STF Con" [5].

Sadly, it is much more problematic to get a view of the proverbial cafeteria (or bar, depending on who you ask) where the excluded Futurians retreated to. Other than references calling it "nearby" and "across the street", no one seems to have recorded the name of the establishment. However, Bickford's Cafeteria [6] at 127 East 59th is "across the street" and "nearby" just a couple of buildings away. If the place was a cafeteria, then Bickford's is likely a great match for the Futurians hideout from fannish fury:

Prices seem to be a little high for 1939 fans. Maybe they just imbibed.

Here's an interior of a Bickford's in early 1940s: 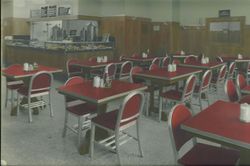 This could be an interior of a restaurant today with those aluminium chairs and ketchup bottles. [7] Wish we had those prices though.

As for the con itself, the rare 1st Edition of the FFF's Illustrated NYCon Review should contain at least one photo of the rostrum, perhaps several. There's a hint though of this in one interior shot from the 1940s: 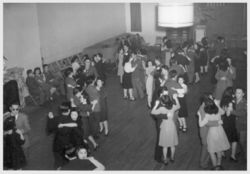 Caravan Interior from Sometime in the 40s

Note the white podium at the center rear. (No sign however of the notorious radiator behind which the infuriating Futurian pamphlets lay hid.) Another shot shows a bit of the hallway: 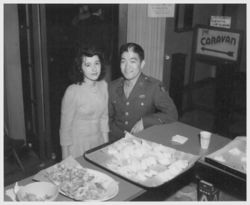 While much has changed on 59th Street, you can still go into Argosy Books as did fen in 1939: 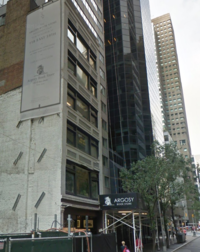 However, today's edition of Argosy moved into the building next door from where it was in 1939. Truly remarkable though is that both the building and the bookstore remain to this day. Wow.

You can see this same old/new building in the background of Caravan Hall looking southeast: 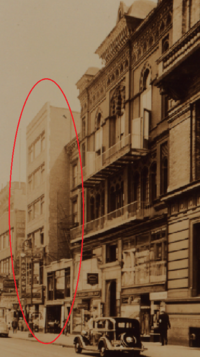 Where in 1939 the Margarita Restaurant and candy store were (as seen in the earlier photo).

And what of Caravan Hall itself? There's still a 110 East 59th street address, but sadly the hall has fallen--torn down many years ago to be replaced by the "Yankees Clubhouse" (a sanctioned souvenir shop) and offices: 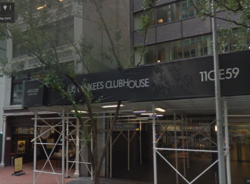 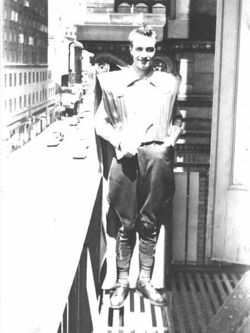 Famous Forry on the Balcony Photo

One challenge that threw me off for months in finding photos of Caravan Hall came from the oft-reprinted photo of Forry Ackerman at NYCon 1. Here's the photo [8] as reproduced here 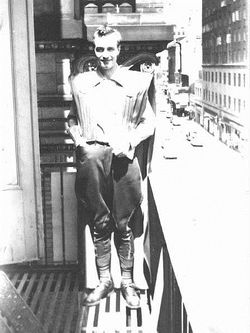 None of the buildings in the background matched those shown in 1930's photos of 59th Street. I all but gave up hope then that there were any photos of the site—after all, Google Street View was 70 years in the future. I just about resigned myself to this when I suddenly thought "Wait. What if this reprint of 4E is actually flopped?"

It was after I reversed the picture then that the photo and location instantly matched: 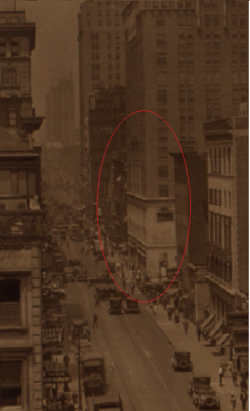 Now, the base of the background building (the Hotel Delmonico) in the 4E pic matched up with this known photo of the hotel on 59th Street and Park Avenue: 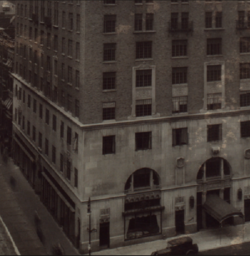 More importantly, the balcony 4E is standing on (as well as the cement one behind him) match right up too: 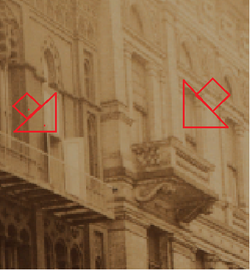 The Balcony from Outside

They even match right down to the style of the open door frame on the balcony. (From this angle, the pictures almost seem like they were taken on the same day. You could just catch 4E stepping out right then from the hall.)

Some may wonder what Forry was relishing out there on the balcony. The chance to pose or the view of this: 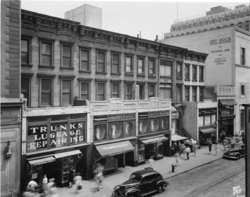 The View from the Balcony

Maybe he needed some luggage repaired or wanted to give a furtive glance at the terra cotta-crested food-foisting fortress of the Futurians at the far right?

Eureka! Our Caravan Hall photos are found. Thanks for those who thirst for fannish history who enjoy this journey to all-but-lost worlds of yesterday!