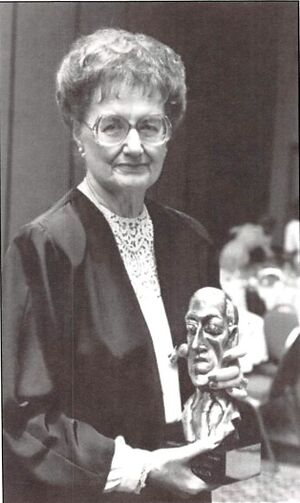 Alice Mary Norton was an American pro writer who wrote under the name Andre Norton. She published her first novel in 1934 and worked as a librarian before becoming a full-time writer. After the War, she began writing SF and (along with Heinlein and the authors of the Winston Juveniles) became one of the key writers who introduced kids to SF in the 50s.

In the 60s, she turned more to outright fantasy, beginning her popular Witch World series. She was a member of the Swordsmen and Sorcerers' Guild of America. She became somewhat of a recluse, rarely attending conventions. In later years, she moved to Tennessee, and established High Halleck, a research library and writer's colony near her home.

Over her career she wrote more than 300 novels (including one with a title beginning with every letter of the alphabet) and many shorter works. She also used the pen names Andrew North (used mainly in the 50s for YA SF) and Allen Weston.

There is a Norton Newsletter fanclub.