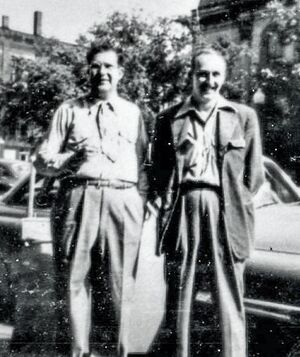 Alvin Earl Perry, an early fan, grew up in Texas and, in 1934, proposed to run the Central Texas chapter of the SFL in his hometown of Rockdale. The Science-Fiction Tests were his idea. He was SFL Member #355.

Earl moved to Battle Creek, MI, after 1940. He was a member of the Galactic Roamers and among the fans at the 1942 Michiconference and Michicon 4 in 1944. His mother, Helen Perry, was also active in Michigan fandom.

Earl also attended the First Post-Radar-Contact-with-the-Moon Con in Chicago in 1946 and the first Midwestcon in 1950. He belonged to the N3F.