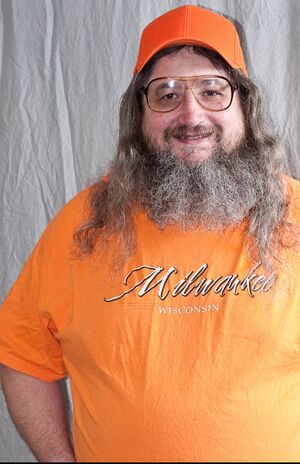 Milwaukee fan Michael James Lowrey, better known as Orange Mike, stands out at any convention: He's the guy dressed head to toe in blaze orange. That's not just a hall costume — Mike clads his fan-shaped body that way in his daily mundane life too, both at his day job for the State of Wisconsin and his second occupation as a bookseller at Milwaukee's Renaissance Books. He was filmed in living color as a bright spot in the Occupy Madison protests. He owns 60 pairs of orange underwear.

"Quiet good taste is the key," says Mike; "once I learned to avoid that, I could find a look that worked for me."

He also wears a full beard, now graying, and keeps his hair long under his orange fedora, tophat or ballcap.

A native of Jackson, Tennessee, he found fandom during the 1970s while living in the South. (He had joined the Society for Creative Anachronism (where he is known as Lord Inali of Tanasi) in 1971. He was a member the Nashville Science Fiction Club, and moved to Milwaukee in 1977. He served on the directorate of the N3F.

He has been an active fanzine fan, pubbing his own zine, Vojo de Vivo, last published Feb. 22, 2001, and has participated in several apae, most consistently MilwApa (where his zine is Bemusements of a Visible Fan). He is an Esperantist. With James Nicoll, he was a juror for the 2015 Working Class/Impoverished Writers Grant given by the Speculative Literature Foundation.

Mike appears in the 2004 feature-length film Finding the Future.

Since 1981, Mike has been married to C. Kay Hinchliffe (aka Cicatrice du Veritas). They were married during X-Con 5. In the story of their wedding broadcast by the BBC World Service in 2013, C. Kay notes that Mike wore a rust-orange tuxedo. They have one fanspring, Kelly J. A. Lowrey, born in 1995.

Besides fandom, Mike belongs to such groups as the Wobblies and AFSCME and is an extremely active and sometimes controversial admin on Wikipedia, where the rules are complex, arcane and quite different from Fancyclopedia 3, and snarky comments like this would not be allowed. ^^[Citation needed]^^