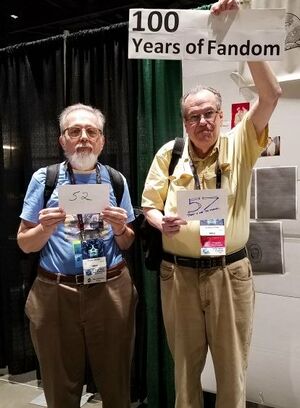 (Dr.) Frank John Olynyk was a longtime Ohio fan and book collector, a regular at Midwestcon and Worldcon, among other conventions. He volunteered on many Worldcons.

Frank was an inveterate con photographer who contributed scores of pictures to Fanac.org.

Olynyk spent two years collecting the signatures of all 31 dedicatees of Robert A. Heinlein's Friday and presented the signed copy of the book to Heinlein for his birthday in 1986.

In mundania, he had worked as a computer systems programmer, technical developer, and senior manager. Besides fandom, his other big interest was military aviation, specialising on US fighter aces; he wrote or contributed to several books and was well-known and liked in online forums.