The Legend of Wigwam Village by Patrick Molloy

One of the strangest and most retold tales to come out of Kentucky Fandom is the Wigwam Village in '86 DeepSouthCon bid. The whole thing was the brainchild of Rickey Sheppard, but as he's largely gafiated, I will do my best to reconstruct those events. 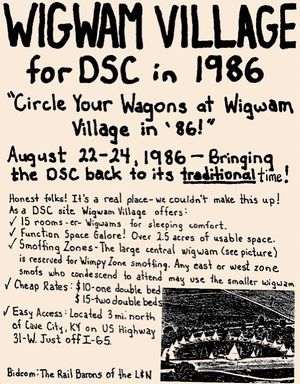 As Huntsville, AL was preparing to host DeepSouthCon 23 in June of 1985, we had heard of only one announced bid for the next year's DSC. Rickey felt that it just wouldn't be right to let the DSC be awarded without some sort of contest, so he dreamed up the Wigwam Village bid. Wigwam Village is an actual roadside motel located in Cave City, KY, near Mammoth Cave National Park, and just down the road from the Park Mammoth Resort, longtime home of Concave. The motel is made up of about 12 concrete cabins shaped like teepees, with a larger central teepee serving as the motel office. The office includes a gift shop and an "Indian Museum." In addition, there is a picnic area and children's playground, all situated on a one-and-one-half acre lot along U.S. Highway 31W. This motel was built before the Interstates, when family car trips via the U.S. highway system were common, and hotels were looking for gimmicks to attract in customers. It was one of a series of Wigwam Village motels built throughout the country, most of which have since been demolished. There are only two other survivors that I know of, one in Holbrook, Arizona (that I've actually stayed in), and one somewhere in California.

Getting back to the bid, however, Rickey and his co-conspirators printed up bid flyers, and had everything ready for the presentation on Sunday. Things then got stranger. A group of Kentucky fans from Lexington, Louisville, and Bowling Green, including Rickey, decided that Memphis TN, the only other announced bid, needed some real competition, and so put together a serious last minute bid for Louisville. Therefore, Rickey found himself as chairman of the Wigwam Village bid, and a committee member of the Louisville bid, and thus in competition with himself.

At the DSC business meeting, each bid was given time to present their site, and then questions were taken from the audience. Rickey presented his bid absolutely deadpan, but the audience was laughing to the point of pain. He laid out the facilities, the number of rooms, and the location just as they are. When the bids were asked, for example, how large their function space was, Rickey would answer "We have an acre and a half." At the end of the presentations, when each bid gave a closing statement, Rickey left them with the warning: "If you vote for us, you'll get exactly what we presented." Wigwam Village did not win, of course; that honor went to Louisville. But the Wigwam Village bid has lived on. A DSC business meeting rarely takes place without at least one write-in vote for Wigwam, and at one recent DSC, two-fifths of the votes cast were for the concrete teepees. Years later, Jane & Scott Dennis even printed bid T-shirts, which can still be seen on occasion.

One thing fans should know is that the management of the Wigwam Village Motel knows absolutely nothing about any of this. If you were to ask them if that is the site of the famous Wigwam Village bid, you would probably be greeted with a puzzled look. However, if you are ever driving along I-65 or 31W through central Kentucky, it might be worth your time to stop off at Wigwam Village, browse the gift shop, buy a souvenir, and think about what might have been. Just don't tell them why you're there.