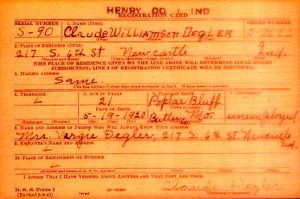 Spent a few hours in early 2021 trying to determine if Claude was dead or alive. As he'd be over 100, it really looks unlikely.

A few hours of searching on ancestry.com and on the Internet in general didn't solve this question. The possibilities for Degler seem to be 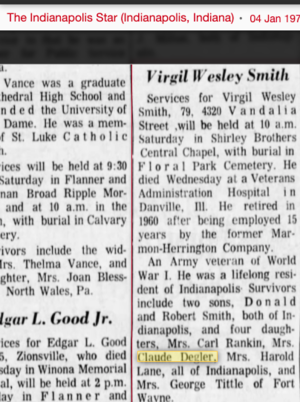 I'm not an expert in genealogical research, but would his wife's death certificate say "widowed" if there was some possibility they had gotten divorced? Ben Ostrowsky (talk) 09:13, 11 February 2022 (PST) It is not clear how long Alta Doris and Claude remained married, but SOMETIMES divorced people will say they're widowed - newspaper obits are not independently researched.LaurieMann (talk) 13:18, 21 September 2022 (PDT)

The Indianapolis city directories for 1951 and 1956 list Doris Degler as the widow of Claude, although clearly that was not the literal truth. And in the 1950 census she was living with her parents, although married. Perhaps they never divorced per se, but at least in the 1950s she appears to have considered him gone. Bee Ostrowsky (talk) 12:25, 21 September 2022 (PDT) Thanks for your note on the 1950 census! I found Alta Doris in the 1950 census but not Claude (at least, not the name Claude Degler). Maybe they had an on and off marriage.LaurieMann (talk) 13:18, 21 September 2022 (PDT)