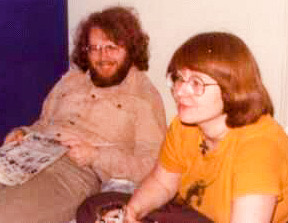 Stuart Stinson, a fan originally from Acme, Michigan, became active in fandom in the 1960s. He was a member of the N3F, where he was assistant buhead of the Tape Bureau.

In 1976, he arranged a car pool to MidAmeriCon with several other Michifen, using his family station wagon. One of his three brothers came along; he was taking the car on farther on a vacation of his own, and was to return at the end of the Worldcon to pick up his brother and friends. Came Labor Day, and the brother never turned up. This sent two of his teenaged passengers, Leah Zeldes and Larry Downes, into a panic — convinced parentally enforced fafiation would ensue if they weren’t home in time for the start of the school year.

Even though their predicament wasn’t his fault, Stu, then a college student, generously bought plane tickets to get the two high-school kids home. Air travel was still a big deal in the ’70s. It was Leah’s first plane ride, ever.

Stu lived in Annie Hall in East Lansing in the late ’70s. He now lives in the Boston area with longtime partner Anne-Laurie Logan. He spent part of his youth working at the Kwikee Kwiver company, an archery accessories manufacturer his father, Bob Stinson, founded in 1957.