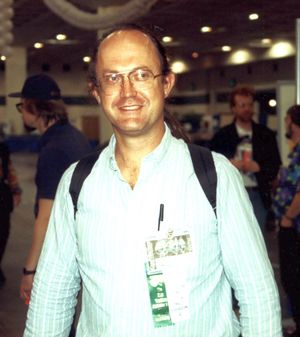 Robert K. Wiener is a fan, pro, and collector. He joined MITSFS in 1965 and was Lord High Embezzler for 2.5 years (and remains a lifetime member), and joined NESFA in 1969. He was elected a Fellow of NESFA in 1976. His first SF convention was Boskone 2 in 1966 and by 1971 he was a committee member on Noreascon 1, that year's Worldcon. His interest in art started early and in the 1970s he set up the Kinetic Katalog, and continuous 3-projector slide show of SF art and related visual materials.

Starting in 1972 he was involved with Bill Desmond and Donald M. Grant in the production for the first three Boskone Books. In 1976 he started Archival Press Inc. which published SF, fantasy, graphic novels and art portfolios. In 1982 he became partners with Donald M. Grant in Donald M. Grant, Publisher of which he is now President.

His life-long interest in SF art has led him to build one of the great collections of it, and he has presented a number of exhibitions of material from his collection. He is especially known as a collector of Jeffrey Jones's work, including an exhibit at the World Fantasy Convention 2007.