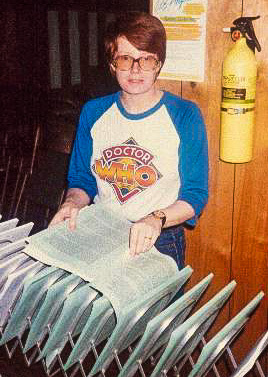 Robbie Bourget at the collating rack.

Robbie Bourget (formerly Cantor) is a conrunner and club fan. She is co-chair of the NASFiC Pemmi-con 2023.

She started out in the Ottawa area in Canada, where she joined the Ottawa Science Fiction Society before moving to Los Angeles and becoming a member of the Los Angeles Science Fantasy Society, where she served as president and treasurer.

Robbie has worked on many conventions, beginning with Maplecon in Ottawa, then Loscons and Corflu 9 in Los Angeles, Worldcons in a variety of places, and Eastercons in the UK. She was chair of Loscon and co-chair of the 2009 Worldcon in Montreal, Anticipation. She served on Worldcon bid committees for Montreal in 2017, New Orleans in 2018 and Winnipeg in '23.

Robbie participated in the apae LASFAPA, APA-L and WOOF. She has also been part of a number of Dr. Who-related endeavors.

She was married, for a time, to Marty Cantor. Together they published the fanzine Holier Than Thou in the 1980s. She has lived in the UK since 1998.