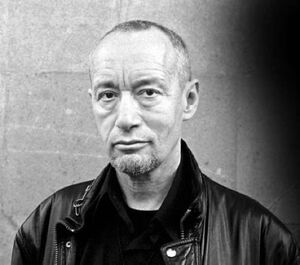 Rafael Levchin, a fanartist, became active in fandom in Kiev, Ukraine, where he was a member of the Zoryany Shlyah SF Club. He led a young writers’ workshop focusing on sf and fantasy between 1989 and 1991. He also translated some sf into Russian, most notably a few pieces by Stanislaw Lem, from Polish.

In 1991, he moved his family, including his 16-year-old son, Max (b. July 11, 1975), to Chicago and connected with fandom there via Dick and Leah Smith, who had been trading with the clubzine Chernobylization. He and Max attended Chicago cons, where Max translated for his dad. Rafael drew for Stet and other zines.

“Even after I went off to UIUC in 1993,” Max recalled, “he remained staunchly committed to CapriCon and several other cons held in Chicago area. (He did pick up enough English to not need me for translation.)”

Rafael was a graduate of the Moscow Literary Institute in Creative Writing and Poetry. He wrote exclusively in Russian, mostly meta-realist poetry, though some of his work was in fact prose sf. His younger son, Sergey (b. February 23, 1979), translated a fair bit of it into English for his master’s thesis in comparative literature at Columbia University.

The Smiths introduced Max Levchin to Bruce Schneier, who sparked the teenager’s interest in cryptography; he grew up to become a co-founder and the first CTO of PayPal and, later, founding chairman of Yelp.